Menu
A simple guide to healthy living in a germy world > Module 1 – What do we know about the rise in inflammatory diseases?

What do we know about the rise in inflammatory diseases?

In the last century, diseases caused by overreaction of the immune system have increased steadily, particularly from around the 1970’s onwards. This has been especially the case for industrialised societies.

Allergies now affect as much as 50% of the industrialised human population.

Auto-immune diseases such as Type 1 Diabetes and Multiple Sclerosis (where the immune system reacts against the body’s own tissues) and other diseases involving inappropriate immune responses (e.g Crohn’s Disease) are prevalent in at least 10% of industrialised populations.

Although many different factors play a role, it is becoming clear that exposure to microbes has a vital part to play. 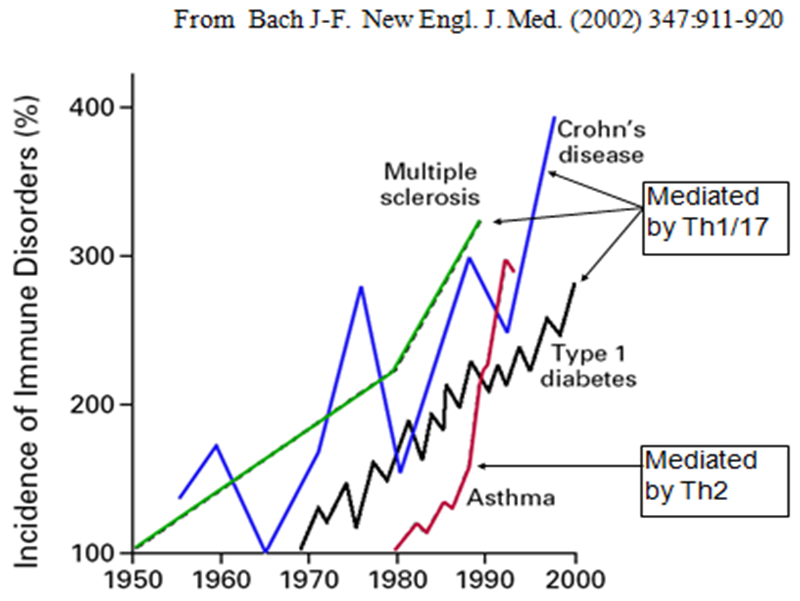 In the early 1900s, hayfever was so rare that doctors struggled to find cases to study.

It is estimated that 10 million people in the UK now suffer from hay fever.

PreviousIntroduction Continued
NextModule 2 – How does microbial exposure protect us from allergies and other chronic inflammatory diseases?
View Contents

Find out more or adjust your settings.

This website uses cookies so that we can provide you with the best user experience possible. Cookie information is stored in your browser and performs functions such as recognising you when you return to our website and helping our team to understand which sections of the website you find most interesting and useful.

Strictly Necessary Cookie should be enabled at all times so that we can save your preferences for cookie settings.

If you disable this cookie, we will not be able to save your preferences. This means that every time you visit this website you will need to enable or disable cookies again.

This website uses Google Analytics to collect anonymous information such as the number of visitors to the site, and the most popular pages.

Please enable Strictly Necessary Cookies first so that we can save your preferences!